Defamation, What you need to know

Home » Articles » Defamation, What you need to know
Posted by admin, September 10, 2012

Malice in Defamation, What Do You Know About Malice?

To what most people could understand, malice is a nasty feeling of wanting to hurt another person. In legal application, the term malice is very comprehensive and applies to any legal act that is committed intentionally without any just cause or excuse. There is no need to show personal hatred or ill feelings, but, the most important element is the state of mind, that is, reckless disregard of the law in general and of the legal rights of others.

For example, a person can be liable for malice by slandering another who is a non-drinker an alcoholic in front of his or her friends or colleagues. By labeling that person as an alcoholic, the person’s feeling can be hurt, whether or not you indeed are aware would harm him. Your simple act of recklessness can cause you into trouble! There is no need for any definite intent to do harm! This is contrary to nasty feeling of wanting to hurt someone! So, when with friends, especially with strangers in the presence of others, one needs to be careful in one’s speech. When the person’s feelings are hurt, he can accuse you having malice or ill intention to hurt him. Be cool, and don’t be reckless! Therefore, recklessness with disregard for truth or falsity can cause you to be in trouble. 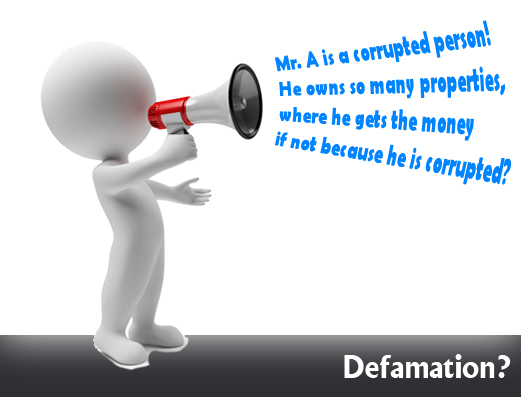 How about when you hurt him when both alone?

If both of you are alone and not in the hearing of others, the person’s feelings may be hurt when you called him who is a non-alcoholic a alcoholic, but, nothing much that person can do to establish any claim for damages from you. The slander has to be in the presence and hearing of others or be communicated to a third party because slander or defamation to be actionable, the words not only tends to injure the plaintiff’s reputation, but, must be capable to expose the public to public hatred, contempt, ridicule or degradation.

However, there are statements that are so defamatory that they are considered defamatory per se and the plaintiff need not prove that the statements harmed his reputation. The classic examples of defamation per se are allegations of sexual misconduct; allegations of serious criminal misbehavior or allegations that the plaintiff is inflicted with contagious diseases such as leprosy or venereal diseases. It is observed that a court may not dismiss a defamation action just because the plaintiff already has a bad reputation. This is because there are cases that hold that even outcasts’ remaining good reputation is entitled to protection.

If You Are Defamed And Wants To File A Suit…

Your goal in this lawsuit is to prove the intention to hurt, not the actual hurt inflicted. That means, to be able to prove intention alone is sufficient and you need not prove actual damage to the judge to prove malice. If the judge believes your case, you may be entitled to monetary compensation for damages.

False Statement To be Defamatory…

If you feel that statements made against you are false and you wish to rely on the false statement as a claim in defamation, you need to determine – How false is false the statement?
The test that the court will determine is whether the alleged defamatory statement as a whole is true or false. Minor inaccuracies could not give rise to defamation claims if the overall substance of the statement is true.

How Much Should be the Compensation?

Damages can at times be very large. This depends on your social status in society and the seriousness of the matter that affects your reputation or character as a person. If you are known and successful businessman or a professional, damages can runs into millions of ringgit. Sometimes, the court may just award you nominal damages only.
_______________________________________

Not sure whether you’ve been defamed or you’ve defamed by somebody?

Tweet
Previous postWhat is Developer Interest Bearing Scheme (DIBS), the term used when buying property from a certain developer? Next post"I am divorcing my husband. Can I get his share of matrimonial property?"