What Risks You Face If You Sell Off Your Car When You Could Not Carry On Payments of Installments? 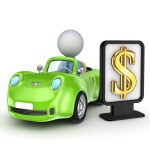