We think the recent Phohibitory Order obtained by the Bandaraya against the organizer and participants of Bersih 3.0 is illegal, or at least improper for four reasons: 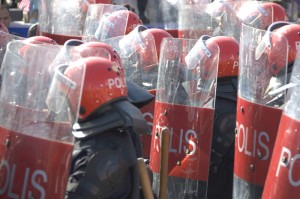 Bersih 3.0 participants or by members of the public to enter Dataran Merdeka in a recent assembly correct and proper in law by Ex-Parte Application to the High Court? If it was true that the Prohibitory Order was obtained as a result of an Ex-Parte Summons to bar Bersih 3.0 participants and or members of the public to enter Dataran Merdeka during the Bersih 3.0 organized assembly, then, it would be arguable that the procedure taken was improper and unjustified, especially, when the Bandaraya had notice or knew that an assembly had been organized by Bersih 3.0 and the organizers are known to the Bandaraya, then, there is no reason that the application was not by Inter-Parte Summons.

(2) Deprived of Right To Be Heard

By going Ex-Parte, if this was done, in the circumstances had deprived the right of Bersih 3.0 organisers the right to be heard, which is a natural right itself. One could not deprive Bersih 3.0 or a person’s right to use and to enter Dataran Merdeka without giving them a hearing why they should be barred from using the place in the first place. They have every right to assemble peacefully and also right of freedom of speech under Article 10 of the Federal Constitution. The right to move around in the country is a fundamental human right and should not be restricted by the law and it is not correct to restrict this.

(3) Bandaraya Has No Right to Prevent Public From Peaceful Assembly

(4) No Service of Prohibitory Order

The Prohibitory Order that was recently issued by the Court and granted to the authorities should be challengeable because according to reports, it had not been gazetted nor been served on the participants. To announce that a Prohibitory Order had been obtained from the Court to prevent the organizers and members of the public to enter into Dataran Merdeka may not be enough to protect the Bandaraya from action taken by the organizers.

Tweet
Previous postINTERNET USERS, BEWARE! Next postPower of PP To Prosecute and How To Avoid Being Prosecuted!